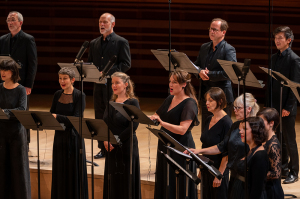 The splendours of Roman polyphony

“The choir accentus is thrilling in every aspect.”
Christophe Candoni, Sceneweb, 5 March 2019

“accentus was by far the finest chorus I have come across in the opera house, from the vibrant jubilation of the opening chorus.”
Colin Clarke, Seen and Heard International, 12 March 2019

“Musically speaking, one should be delighted by the warm sonorities of the orchestra and the quality of the chorus.”
N.B, La Libre Belgique, 14 March 2019

“The great final chorus of praise, a stirring fugue, could not have been better.”
Anthony Tommasini, The New York Times, 20 July 2018

“A thrilling success.”
“Opera or musical? ‘A cappella chamber opera’, says the composer, who shares the conducting of this extraordinary performance with Leo Warynski. The high level of its execution demonstrates the extraordinary relationship built between each member of that strong spirits-based community. Hence lots of praise for the singers-instrumentalists of the choir accentus / axe 21, astonishing illusionists.”
Marie-Aude Roux, Le Monde, 11 July 2018

“The quality and inventiveness of the musical writing for the voice are striking, and remarkably served by accentus’ singers – choir singers with soloists’ talents.”
Sophie Bourdais, Télérama, 13 July 2018

“As for the choir accentus, it is excellent, just as usual.”
Jean-Marc Piriou, Bachtrack, 9 June 2018

“Several songs (including a couple of part-songs, limpidly sung by accentus) appear in skillful new orchestrations by Franck Krawczyk.”
“The recorded sound is mellow and detailed, giving an excellent sense of both the voices and the vivid playing of the Insula orchestra. Very warmly recommended.”

“The Insula orchestra sounds warm and colourful in this intriguing, beautifully conceived recording.”

“accentus shows a manifest pleasure in singing the great choirs of praise, with transparency and beautiful nuances.”

« Prepared by Marc Korovitch, accentus sings the choirs of praise in the most intelligible German. Clarity is the keyword: none of the numerous fugues appears as blurred, and none of the composer’s dramatic intentions escapes from the audience’s ears.”

« And what a musical delight! (…) Located at the centre of the scenic disposal, in which they are refugees in search for a better world, the excelling accentus singers are responding to the double defy they are facing.”

“The much in demand accentus choir lives up to its reputation for excellence, whether in the polyphonic action or the fugue-form exultation.”

“Amongst the unavoidable artworks of the festive and family repertoire is obviously Johann Sebastian Bach’s Christmas Oratorio. For this joyful and lightful artwork an excellent choir is needed. We are very glad to listen to the famous accentus, under the direction of its founder, Laurence Equilbey, who will also conduct Vincent Dumestre’s ensemble, Le Poème Harmonique.”

“The choir was homogeneous, solid and, in a remarkable starkness, explored large universe and sometime, invited to dance.”
“Fine stamp, elegant women’s voice, wonderful musicality of tenor and baritone and wonderful noteworthly intervention of vocal quarter.”
“All the singers make us under charm.”

“With a constant informed historical approach, the French conductor Laurence Equilbey conducts the excellent choir and the solists in a high quality performance ”

“A French choir that celebrates a German victory : it’s a symbol of friendship and understanding between people. Presentation of rare works.”
“Men from accentus choir in particular […] give real pleasure with their vigorous voice and a perfect German prononciation”
“The HR-Sinfonieorchester was inspired by a fine sound, under the direction of a guest conductor”

(3/5 stars)”Laurence Equilbey conducts her period-instrument Insula Orchestra with a keen grip on rhythm and contrasts.”

“[…] of rare beauty and perfection. […] A tremendous performance, hailed as a triumph by a hugely enthusiastic audience, who were totally overwhelmed by the exceptional moment of rare intensity that they had just experienced.”

“The Music Director of accentus and Insula orchestra presented one of the most beautiful versions imaginable of this Gluck opera [Orfeo Ed Euridice]. […] Absolute perfection, especially with the great Argentinian countertenor, Franco Fagioli.”

“Equilbey maintained light but effective control over all three pieces, encouraging her orchestra to display its range of colour with skill and confidence.”

(4/5 stars) “The orchestra, under Equilbey’s supervision, never seemed in any danger of running out of puff”

“Insula Orchestra and accentus are sophisticated music makers. The voices blended softly with the timbre of the strings. (…) the programme and the performances were beautifully poised and were marked by elegant commitment. More please. Especially if it’s Zelenka!”

“(…) Beautifully judged tempos and balance in both chorus and orchestra, allied to fine playing and choral singing and a fine line-up of soloists all went to contributing as satisfying a performance of the work as one is likely to encounter”.

“(…) Laurence Equilbey and her forces will be bringing the same programme to the Barbican Centre on 21 September. London concert goers should not miss it”