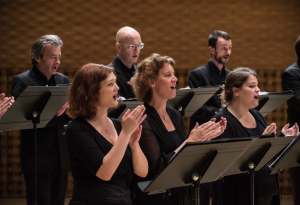 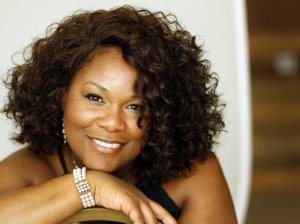 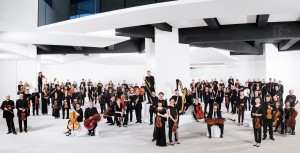 She regularly conducts the orchestra of the Opéra de Rouen Haute-Normandie (Mendelssohn’s Athalie in 2015). Since 2009, she has been working with accentus as an associate artist of the Paris Chamber Orchestra and will be joining up with them again in 2015 for Reynaldo Hahn’s Ciboulette at the Opéra Comique and Dvořák’s Stabat Mater at the Philharmonie de Paris. She is also an associate artist of the Grand Théâtre de Provence in Aix-en-Provence and a companion of the Cité de la musique/Salle Pleyel in Paris.

With accentus, Laurence Equilbey continues to focus on the great vocal music repertoire, while also supporting contemporary creation. The extensive recorded work of accentus (on the naïve label) has received wide critical acclaim. She is also Artistic Director and Director of Education at the Department for Young Singers at the Paris Conservatory.

In 2012, with support from the Conseil général des Hauts-de-Seine, she founded Insula orchestra, an ensemble devoted to the classical and pre-Romantic repertory, using period instruments. The 2014-2015 season will feature the orchestra’s maiden appearance outside France as part of the annual Mozart Week in Salzburg, as well as the release of its first recording, Mozart’s Requiem (naïve).

After learning the accordion and studying musicology, Christophe Grapperon joined Daniel Delarue’s vocal performance class and studied choral and orchestral conducting with Pierre Cao, Catherine Simonpietri and Nicolas Brochot. He was appointed Head of Studies at the Académie de Musique des Grandes Ecoles et Universités de Paris, directed by Jean-Philippe Sarcos. He regularly leads vocal workshops in choral, orchestral or chamber music. He performed alongside Anne-Sofie von Otter in her Offenbach concert, sang the roles of the Notary in Offenbach’s Grand Duchess of Gerolstein at the Théâtre du Châtelet in Paris, and the Scythian in Gluck’s Iphigenia in Tauris at the Paris Opera. After working as assistant to Marc Minkowski on the production of Massenet’s Manon at the Monte-Carlo Opera, and accepted Minkowski’s invitation to take up the position of choral conductor for the Musiciens du Louvre•Grenoble. Since 2007, Christophe Grapperon has been musical director of the company “Les Brigands” and has conducted rare works like Arsène Lupin Banquier by Marcel Lattès, the Cour du roi Pétaud by Léo Delibes and Offenbach’s Croquefer. From Schütz’s Italian madrigals to Brahms’ Ein deutsches Requiem, and from La Traviata to Phiphi, the values of eclecticism and shared pleasure have been at the core of his musical career.